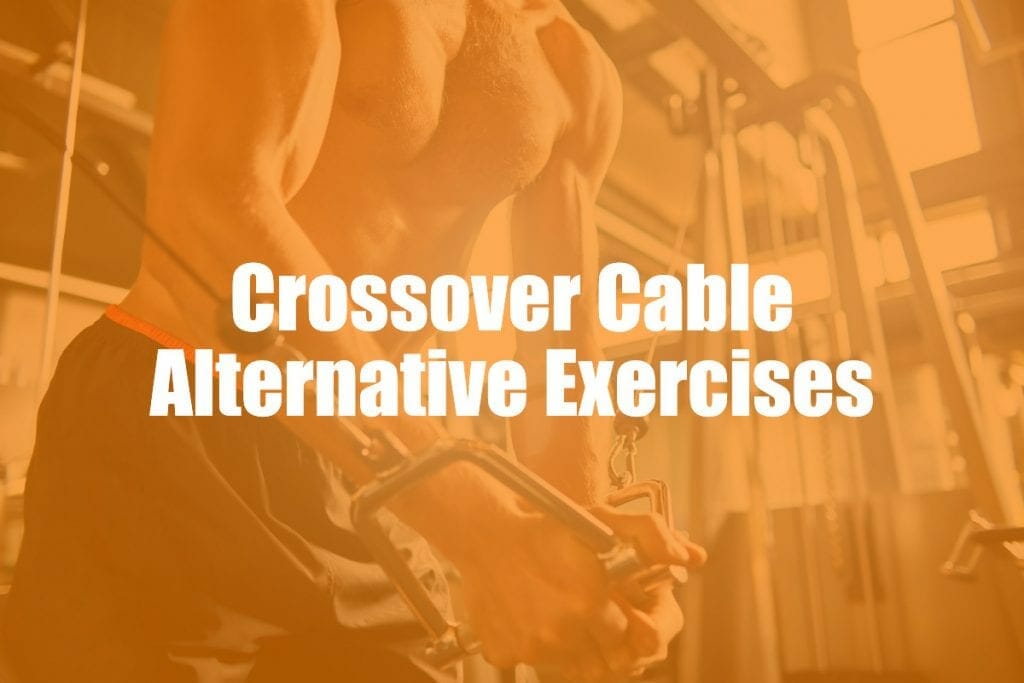 Share on PinterestShare on FacebookShare on TwitterShare on WhatsApp

Cable crossover exercises are popular in physique-building programmes. There’s no doubt about it, cable crossovers are great chest building tools. But what happens to your get-huge-chest workout program when you don’t have access to a gym? Or worse, your gym forgot to buy a cable machine. Does that mean you can’t build a ripped set of pecs, shoulders, and arms? Absolutely not. There are many alternatives that stimulate growth of the upper body muscles, some with little to no equipment.

But before we get into cable crossover alternatives, let’s just clarify what a cable crossover is. In technical terms, it’s an isolation exercise used to work the pectoral muscles. Weight is pulled down and across the body while your arms remain slightly bent. Picture this. You walk into a typical commercial gym and see all the bro guys on the cable machine training for what looks like the world’s strongest hug, this is the exercise I’m talking about.

Cable crossovers work the pectoral muscles, with a specific focus on the upper pecs. However, the emphasis on the upper pec comes from the angle of movement rather than the cable itself. Therefore, it is easy to mimic the movement without a cable.

Although the most popular, cable crossovers aren’t the only exercise you can do with the cable machine. In fact, there are plenty of upper body exercises suited to working out with cables. But there are also great alternative exercises that pretty much do the same thing (without the expensive equipment – yep, those machines cost a lot).

So, if you’re a home gym bunny or CrossFit athlete who has access to limited equipment, these are the exercises for you.

Once you’ve found your anchor, wrap the resistance band around it at shoulder height. Hold each end of the band in separate hands, take a step forward into a split stance position, then take a slight lean at the hips while keeping your back straight. Slightly unlock your elbows before bringing your hands across your torso.

You can change up the resistance by using different width bands or holding the bands closer to their centre.

Since all your weight is supported by the bench, incline dumbbell flyes allow you to move greater loads and further isolate the upper pec. Take a dumbbell in each hand and lie on an inclined bench with your feet flat on the floor, and knees bent to 90°. Hold the dumbbells above your chest, with your arms fully extended. Then create a slight bend in the elbow before lowering your arms out to the side until they are parallel to the floor. From here, pull your arms back to the starting position.

Every gym bros’ favourite exercise, the bench press. However, this bench press is a bit different. To make this exercise relevant to a cable crossover, we’ve manipulated the angle and equipment typically used to perform the beloved bench press. Using dumbbells rather than a generic bar is more relatable to a cable crossover machine. When you use a cable machine, you’ll need to apply equal force output from both arms, just like you would when pressing with a dumbbell. In contrast, we move a barbell with both arms working together, meaning force output isn’t always equal. And that’s why dumbbells can help even out any strength differences.

Your set-up here is going to be exactly the same as the incline dumbbell fly. Take a dumbbell in each hand and lie on an inclined bench with your feet flat on the floor, and knees bent to 90°. Hold the dumbbells above your chest, with your arms fully extended. Create a slight bend in the elbow, bending until your elbows fall in line with your chest. Then, push the dumbbells back towards the ceiling.

Banded rows are a credible alternative to the seated cable row. The difference is that the resistance increases the further you stretch the band. It’s a different experience and keeps the muscle fibres guessing.

For this exercise, you’ll need a box (or some sort of stool or bench), a resistance band (this Rogue Resistance Band set will cover every possible situation) , and an anchor. Wrap the resistance band around the anchor at hip height. Hold each end of the band in separate hands, take a step back and sit on the box. Begin with your arms fully extended, feet flat on the floor, and knees bent to 90°. Sit in an upright position and your shoulder blades pulled back and down. Unlock your elbows until your hands touch your chest. Really focus on squeezing your shoulder blades together, like you’re trying to trap a pen between them. Fully extend your arms before you begin the next rep. Again, you can change up the resistance by using different width bands or holding the bands closer to their centre.

If you can’t find somewhere to attach a resistance band, try standing on it and doing bent over rows. As demonstrated in this video:

One arm resistance band lateral raises are a great alternative to the one arm cable lateral raise. Both exercises use the same movement, just different equipment. Therefore, you are still gaining the most out of this exercise to help you build powerful delts. Start by standing on one end of the resistance band, and grasping the other end in your hand, at your side. You should feel a slight bit of tension in the band before you begin the rep. If you don’t, move more of the band beneath your foot. Maintain a slight bend in the elbow before raising your arm out to your side until it is parallel to the floor. Repeat this movement on both sides.

We love this one. Pretend you’re a lumberjack as you jack up the core and shoulder muscles in this awesome coordination of strength and stability. Hit the transverse abdominis and oblique muscles, and shoulder, back, and arm muscles in this functional movement.

Attach the band to a rack, pole, or fixed (strong) place in your home. Keep it around about shoulder height or slightly below.

Stand facing 90 degrees away from the rack. Your shoulder should be facing where the band is attached.

Grab the band and position yourself to where there’s some resistance from the band you are holding in both hands. (You might want to start off with a low resistance band until you get used to this exercise)

Pull across your body, keeping the arms almost straight, and move smoothly in a straight line. Return to the starting position and repeat.

Another bro classic, the dumbbell bicep curl is a great arm building exercise and a great alternative to cable curls. Performed properly, the bicep curl works your abs, triceps, shoulders, and of course biceps. Bicep curls can be very much an ego exercise. What I mean by this is people will often sacrifice form to lift a heavier load. Not only is this dangerous, but it also takes away many benefits of the bicep curl. A sloppy, heavy, ego-based curl won’t engage your secondary muscles as much, therefore wasting potential benefits. A well-performed slow bicep curl will engage those muscles, making it an effective arm building exercise.

To perform a perfect bicep curl, hold a dumbbell in each hand at your side. Place your thumbs on the same side as your fingers and press your elbows into your torso. Squeeze your glutes and abs, while keeping your upper arms still, pull the dumbbells up to your shoulders. At the top of the curl, squeeze for a second before controlling the descent of the dumbbell.

A great alternative to this is the band bicep curl. The interesting part about this is that the resistance is greater the further the band is stretched. With just a simple rubber band you can build serious guns. Stand on the band to keep it firmly on the ground. Keeping shoulders down and elbows in, slowly curl your arms while pulling the rubber material. This video demonstration shows how it’s done.

Advantages of Resistance Bands and Dumbbells

Dumbbells, also known as free weights, are arguably the unsung hero of the fitness industry. They are an amazing strength and conditioning tool that can and should be used by beginners all the way up to advanced athletes. Dumbbells focus on unilateral, stability, and isolation exercises. What does this mean? Well, unlike a barbell, dumbbells require the same amount of work to be completed by both the left and right side of the body, meaning any asymmetries are evened out. They are also less stable which forces our smaller stabiliser muscles to work. However, this doesn’t mean barbells aren’t also amazing, they are, they just have a different role.

If you have minimal equipment and don’t want to join a gym, resistance bands are great to help you build muscle. While external weight isn’t needed to build muscle, it takes you to the next level in terms of gains and strength.

Cable machines offer many benefits for the fitness enthusiast and bodybuilder. However, they are not always the most accessible pieces of equipment. There are plenty of ways to get the same kind of muscle workout with only dumbbells and resistance bands. So you don’t have to worry about missing out on those gains.

wodtools.com
Share on PinterestShare on FacebookShare on TwitterShare on WhatsApp